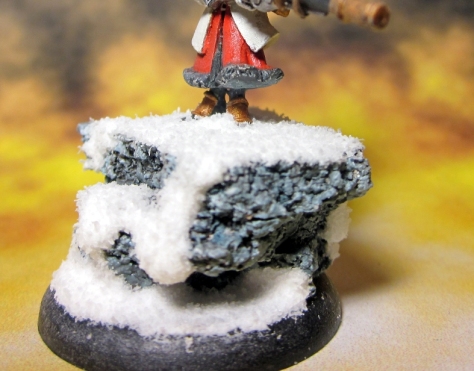 And now for a very special holiday themed how-to article!

Ahhhh…snow.  Love it or hate it in real life, snow can really help make your miniatures stand out.  Something about the white being such a strong contrast to the other colors on the miniature.  Also we are basing our miniatures aren’t we?  We all know painted minis play better, so it stands to reason that well based minis should play even better right?

There are just tons and tons of methods out there on making snow bases and the results are about as varied as you could get.  You can get looks from the solid and globby that looks like fresh Elmer’s glue to the “partially melted” slushie-type look.

As you may already be aware of, my Khador just so happen to be slogging it through the white stuff, so read on and I’ll walk you through how I achieved my particular snow bases!

But before we get started, let’s talk a bit about theme.  All my armies start with an idea: What type of army is this?

For instance, let’s take my Khador.  I started with the main color I wanted to paint them, white.  Then I have the name of my army, the White Walkers.  The force is practically screaming winter now.  So that is the theme I went with.  But I didn’t want just the “lite” winter, with a little snow here, a little snow there.  No, I wanted the full thralls of winter.  The final part of the idea is that they were launching surprise attacks and ambushes, throughout the wilderness of Khador.  Theme achieved!

The first thing we need to do make sure that the minis that we want to get the snow are ready to get said snow.  That means that most or all of the rest of the basing is done.  For example, on my Widowmakers that meant some rocks and tree branches, on the others it meant the bases were painted the way I wanted them.  Since this isn’t like basing with sand flock or gluing bits and pieces down, it is best to do these snow bases in batches. The mix should be enough for quite a few and that way you can knock out a bunch of models at once instead of making a mix each and every time.

There are no real exact measurements, but you can eye it and see if the consistency is where we want.  The ratio is something like 2-2.5 : 2 : .5 : .5; glue, baking soda, water, paint respectively.

The mixture should be pretty thick (a bit thicker than just glue by itself),  but when you lift it out of the container, it should plop off relatively easily.   Basically we want it thick, but easy to work with.  If it’s too runny, add some more baking soda and/or glue.  If too thick, add a bit more water.

Now the fun part.  Let’s grab the minis you want snow on, and either bring them to the sink or set up another container to capture the excess flock we’ll be shaking off.

I found toothpicks to be perfect for this next step.  We are going to use the toothpicks to glob (technical term) our snow mixture onto the bases (or the minis themselves if that’s what you are going for), using them to get it in the crevices and whatnot that we want.  Also if you have rocks or trees, refer back to your inspiration pictures and notice how the snow has fallen on them, as it’s usually on just the tops of them rather than the whole thing.

This next part is optional…I’m going for a very powder-y look to my snow, but if you want a thicker, more compacted snow look, you can stop here and are finished!  Just remember to let them dry (1-2 hours is good, I usually let 24 hours just to be safe).

Once you have the snow how you want it on the minis, bring the mini to the sink/catcher container because we are going to sprinkle snow flock onto the glue parts.  Give it a few seconds to stick, then shake off the excess.  This mini is pretty much done, just clean up the bases a bit (I ran my finger along the base to clear up any loose flock) and let it dry!

Sidenote:  This snow mixture is not just for bases.  If you have warjacks/tanks/whatever and you want snow on them, rather than just around them, you can do that.  The mixture should be thick enough to hold rather than run.  The best method I’ve found for doing this is using a spare/worn brush and dabbing the snow mixture onto it.  You can then sprinkle the flock as normal.

Hope that this tutorial has helped you out, let me know how yours turn out!

7 thoughts on “How to: Make snow bases!”