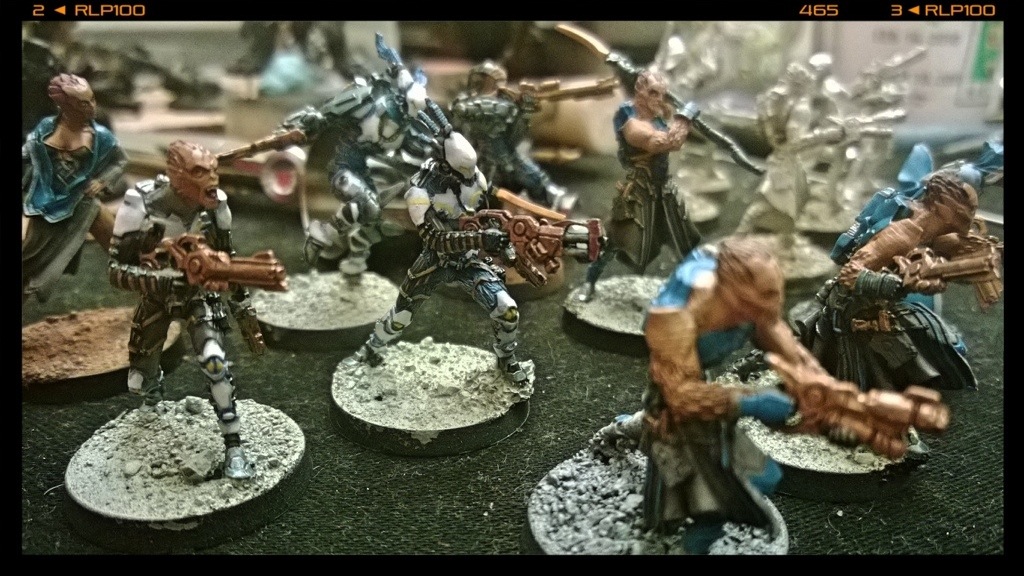 As I mentioned, I am working on getting at least 9 of my 13 Tohaa models painted before my return to gaming in the coming week.

Here’s where I’m at so far.  I obviously decided on the new blue scheme and have been making so marked strides.

I’ve had to strip a hand full of models as they were in progress with my older scheme.  I don’t think I’m going to make the 9 of 13 mark, but progress is better than Congress (topical humor)!  Let’s break it down shall we:

This would technically take me to 9, but I haven’t been counting the Diplomat in my figures as I’m not exactly sure what it actually does at the moment…I think it’s a scenario piece or something for the campaign?  I’ve only been counting the models with weapons. I still need to prime five of the remaining ones, with the Hatail Spec Ops model being the only new “body style” I need to figure out color placement on.

I’ve also started to work on the bases.  I’ll be using Secret Weapon‘s Wet Earth Pigment kit. Their stuff is great,  you should check it out, I make heavy use of their washes in these models.  This being the first time I work with pigments, it should be fun.  So far I’ve only really tested it on the Diplomat.  I intended on doing them all at the same time as per my usual basing methods (basically making one big mess as opposed to many small messes).

Up next, we continue our Infinity kick with some initial thoughts on the game itself and on Tohaa in general!