It’s pretty safe to say that I’m proud of my Torch.   I really took my time on this guy to make sure he came out as good and clean as possible, since to me, he is by far the coolest looking warjack in Warmachine currently.

The other two heavy warjacks I have magnetized for flexibility and pretty standard bases, but for the character ‘jacks (Torch and Beast-09) I decided to just go ahead and give them static poses and more elaborate bases.  In this case, I set up Torch to mimic Kommander Strakhov’s pose, seeing as how he is his personal warjack.  I then decided to take it one step further and have Torch completely mimic Strakhov’s color scheme.  It came out awesome and may approximate the scheme on my remaining warjacks (Beast-09 will be mimicking Sorscha, I do know that), but we’ll see.

Torch is pretty much auto-include in my lists nowadays and he never fails to perform on the table.  Enjoy the pictures! (Sidenote: In the coming week(s), even more completed posts are coming! Stay tuned!) Thoughts, comments, suggestions?  I’m open to them!

You can track Torch’s progress in these posts: one, two, three, and this one as the final.

His entry on CoolMiniOrNot. (where he is currently my most highly rated model!) 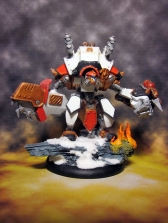 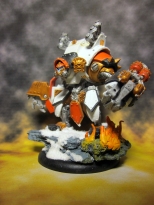 4 thoughts on “Torch! Burninating all the peoples!”